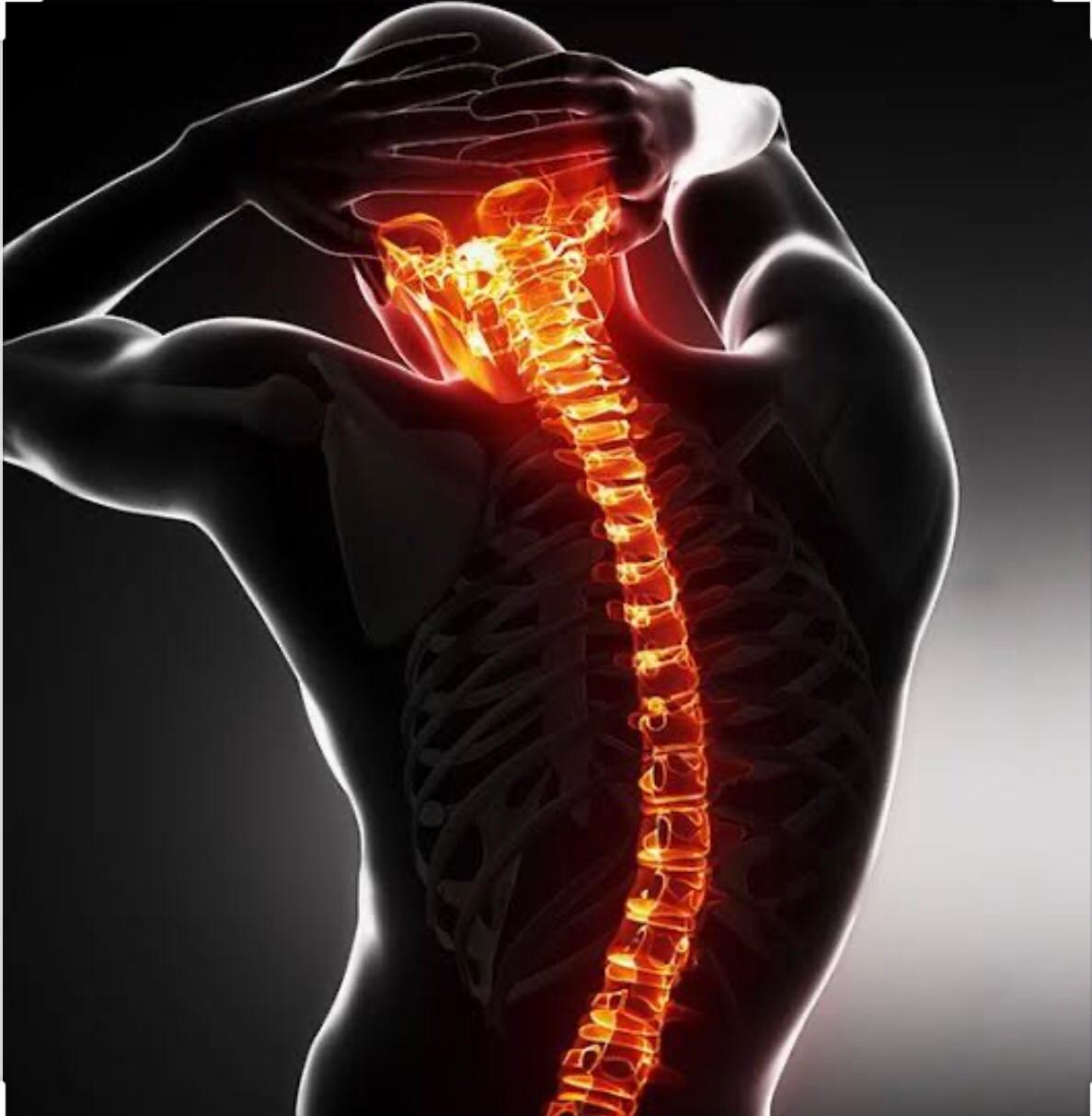 The spine is unique from peripheral joints because of the fact that.It contains 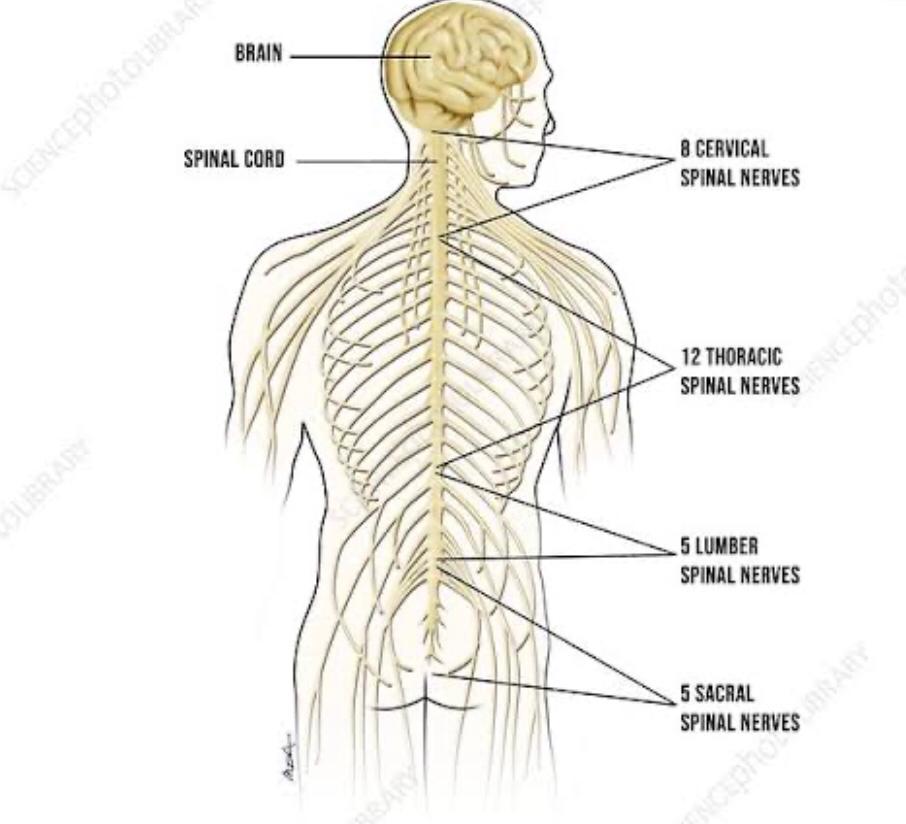 The abbreviations C T L S with the appropriate super script number designate each spinal nerve, or nerve root——for example C5 and T6. The cervical region has seven vertebrae but eight cervical nerves. The suboccipital nerve passes above C1.The C8 passes above T1.Spinal nerve T1 and below leave the spinal cord below their respective vertebral bodies. 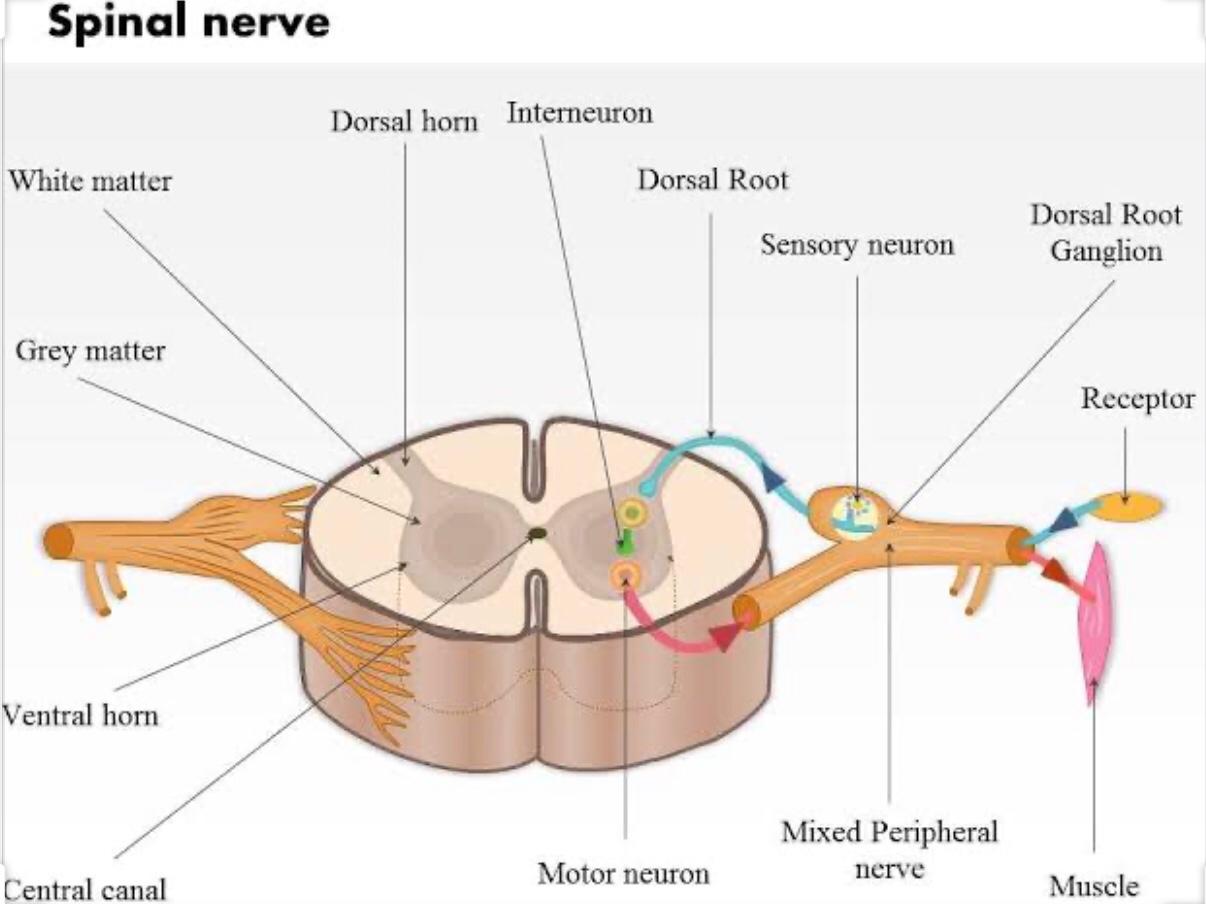 Understanding of the organisation of the peripheral inner action of the cranial revival and trunk muscles begin s with an appreciation of a typical spinal nerve.


Each spinal nerve is formed by union of
a) ventral nerve root containing outgoing(efferent) axons that supply motor drive to the muscles and other effector organs associated with the autonomic system.
b) The dorsal nerve root contains primarily incoming dendrites(afferent) with the cell body of the neuron located in an adjacent dorsal root ganglion. Sensory neurons transmit information to the spinal cord from the muscles,joints, skin and other organs associated with the autonomic nervous system. 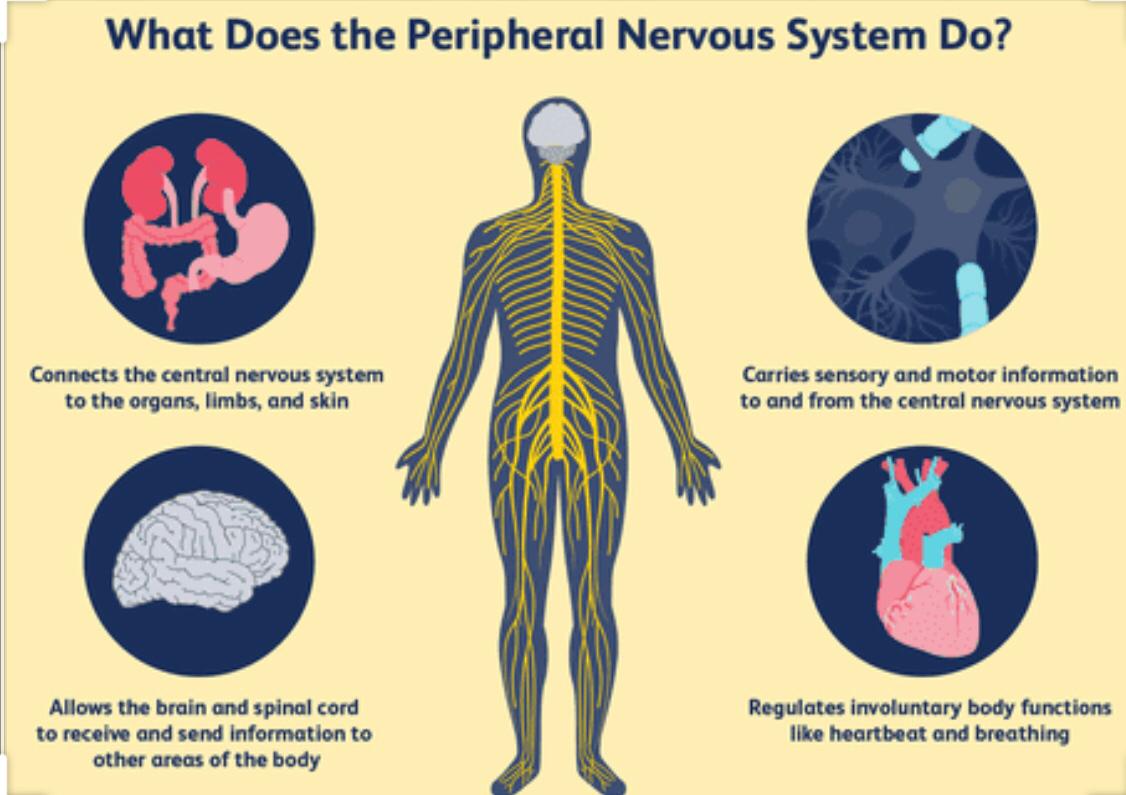 A DERMOTOME is the area of the skin supplied by afferent nerve fibre from a single dorsal root of spinal nerve. There are 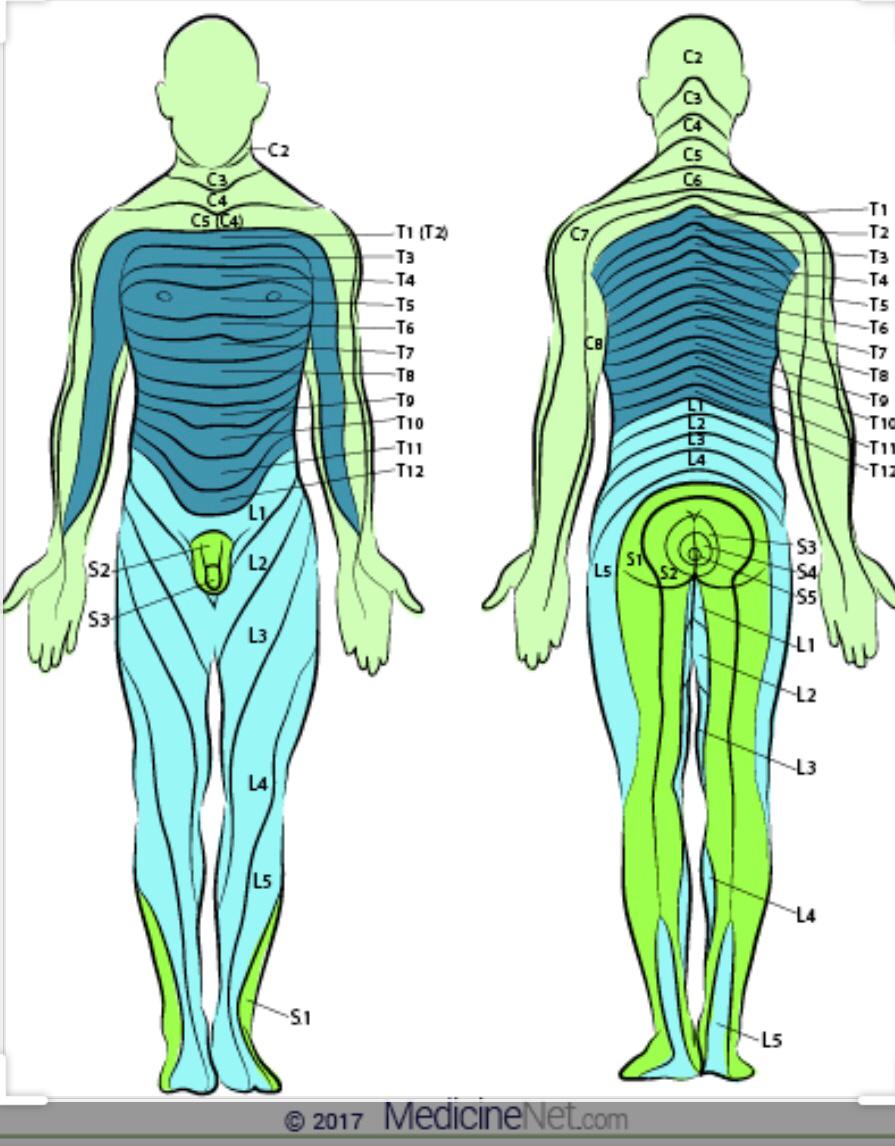 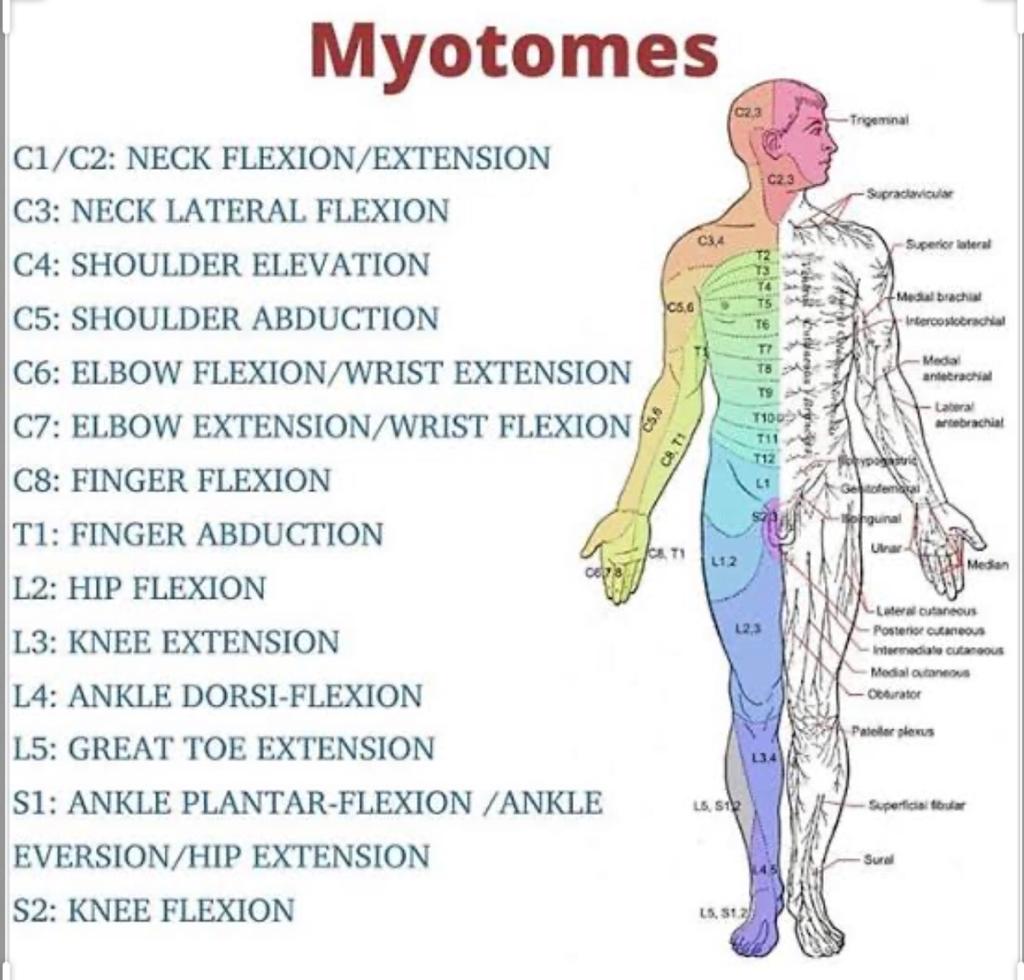 Patients walk into our OPD and EMERGENCY with a complain of pain or numbness starting from the back and radiating to down in to the arm and legs. We call this phenomenon as “ PERIPHERALIZATION”

A herniated disc causes pain or numbness to radiate down to extremity is likely due to pressure from a disc against a spinal nerve , as it exits the intervertebral foramen.

Structure of a typical disc

The formal name for the ruptured or slipped disc is herniated nucleus pulposus.Most herniation involve a significant posterior-lateral or posterior migration of the nucleus pulposus towards the spinal cord and spinal nerve roots. 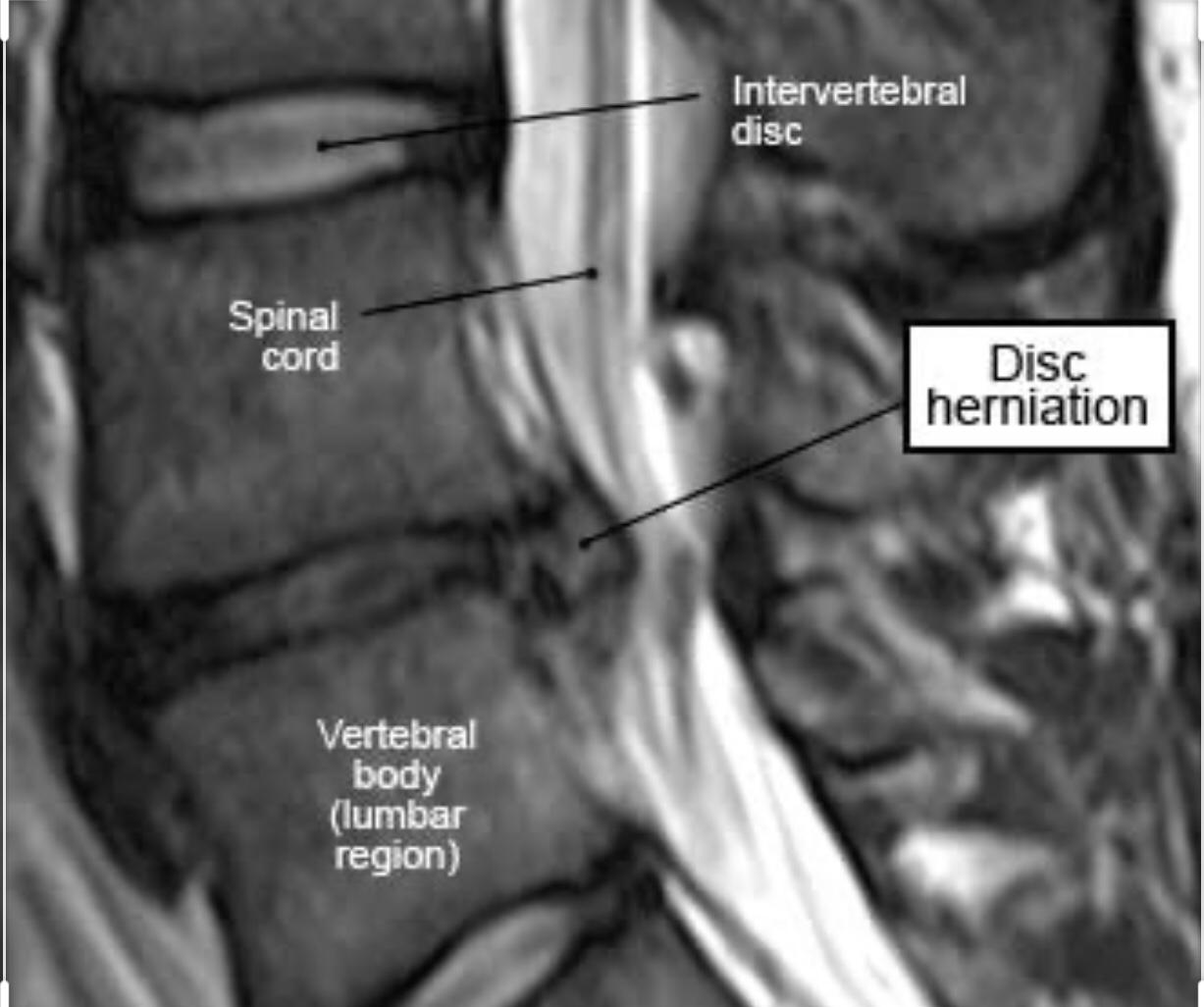 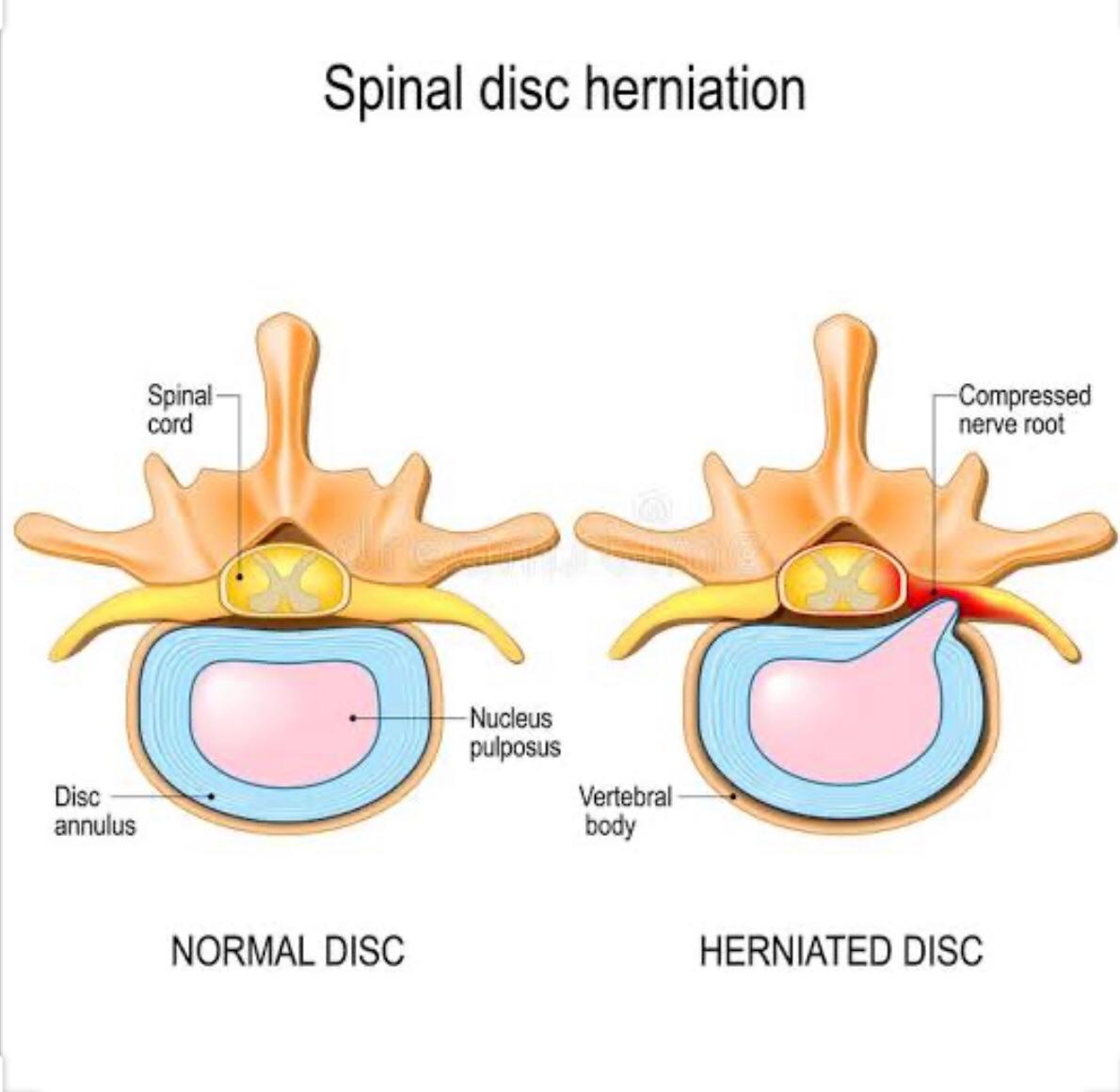 1)Very large, sudden compression force delivers over a lumbar spine that is flexed or most likely flexed and axially rotated Mechanism of injury is often associated with a single event such as fall or the lifting of a large load.

2) The second mechanism of prolapse generally occurs gradually from cumulative microtrauma,such as that which may occur from many years of repetitive lifting or bending with an excessively flexed back

1). Propensity for fissures or tears in the posterior annulus that allows a path for the flow of nuclear material.
2). Sufficiently hydrated nucleus structurally capable exerting high pressure.
3). Inability of the posterior annulus to resist radial pressure from the nucleus.
4). Axial loading applied over a bent( flexed) and twisted spine.

35 years old Male with 80kg weight and muscular build. Walks in to our OPD with a history of lifting 100 kgs for deadlift in a gym in wrong posture 18 hours back, now his pain is radiating down from lower back to back of the thigh and legup to his toes of right foot.

Along with a careful history taking and comprehensive assessment. The most important part for everybody to understand is how we check the “PERIPHERALIZATION” 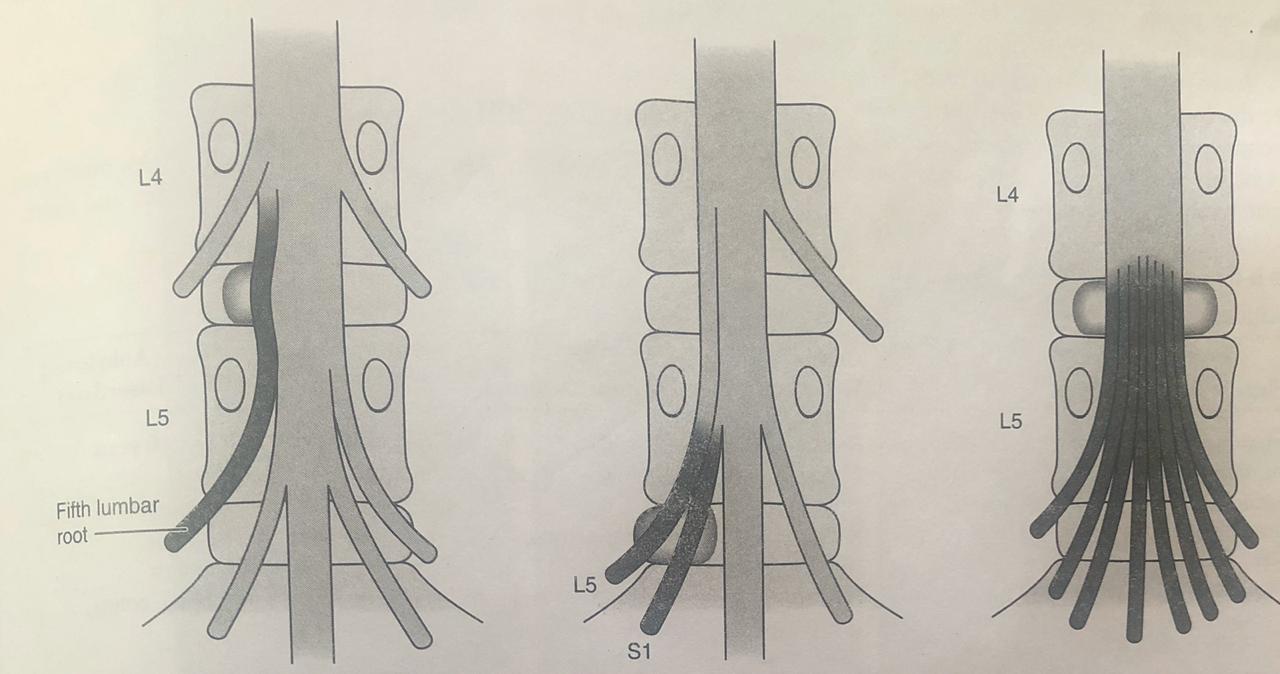 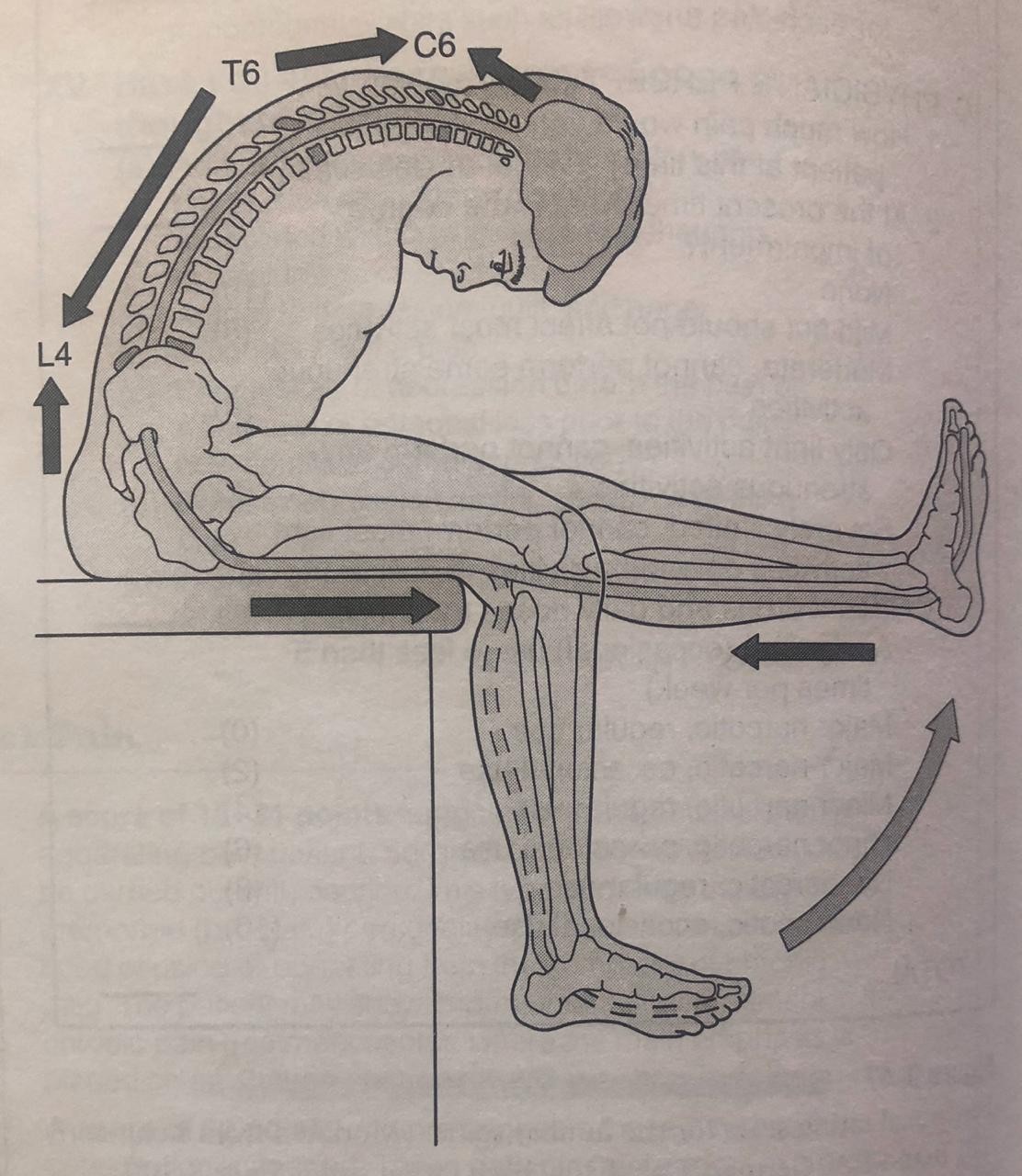 ● Postulated neurobiomechanics that occur with slump movement.
● The approximate points C6,T6 and L4 and the knee are where are where the neural tissue does not move in relation to the movements of the spinal canal.
● It is important to understand, however,that movement of neurological tissue is toward the joint where movement was initiated.


Sequence of subject postures in the slump test

A. Patients sits erect with hands behind back.
B. Patient slumps lumbar and thoracic spine while either patient or examiner keeps the head in neutral.
C.examiner pushes down on shoulders while patient holds head in neutral.
D. Patient flexes head.
E. Examiner carefully applies over pressure to cervical spine.
F.Examiner extends patient's knee while holding the cervical spine flexed.
G. While holding the knee extended and cervical spine flexed, the examiner dorsiflexes the foot.
H. Patient extends head which shoulder relieve any symptoms. If symptoms are reproduced at any stage , further sequential movements are not attempted. 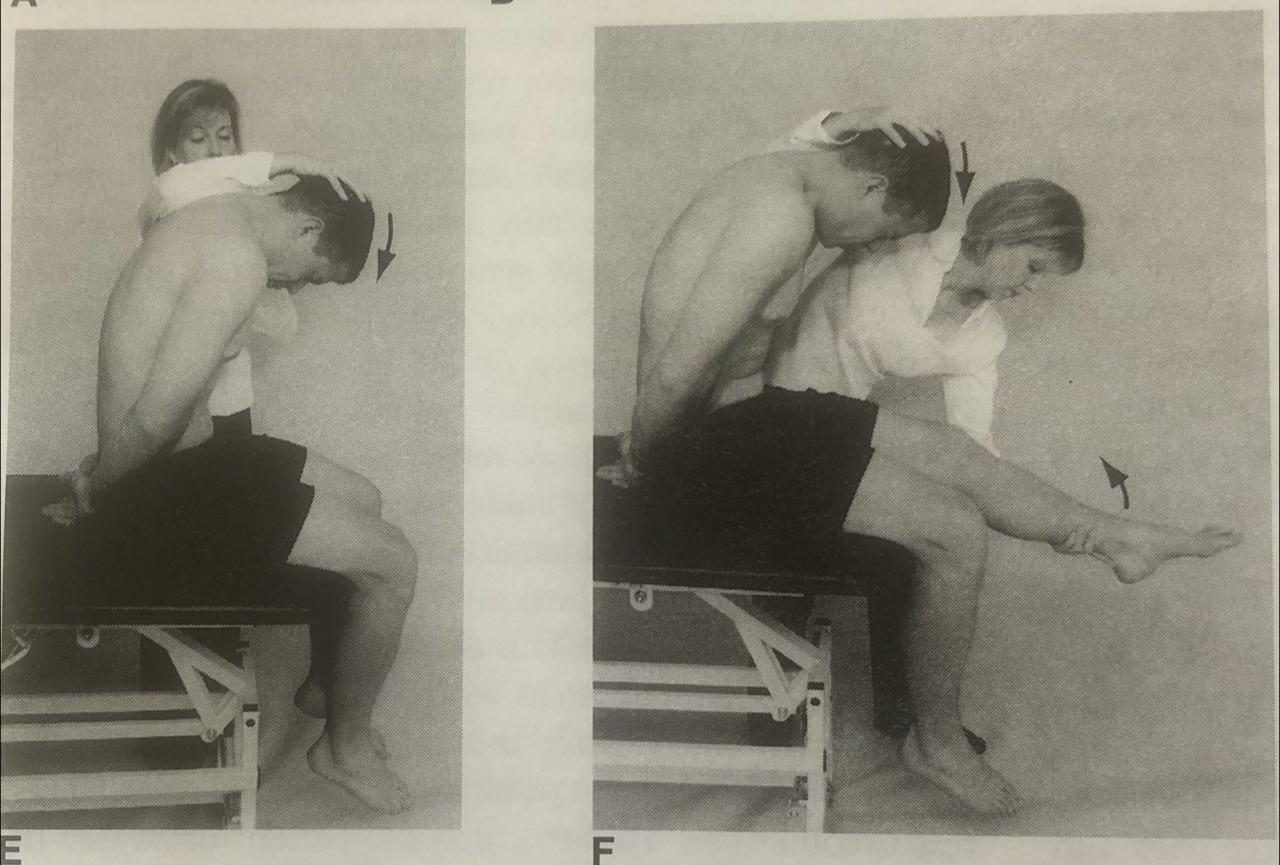 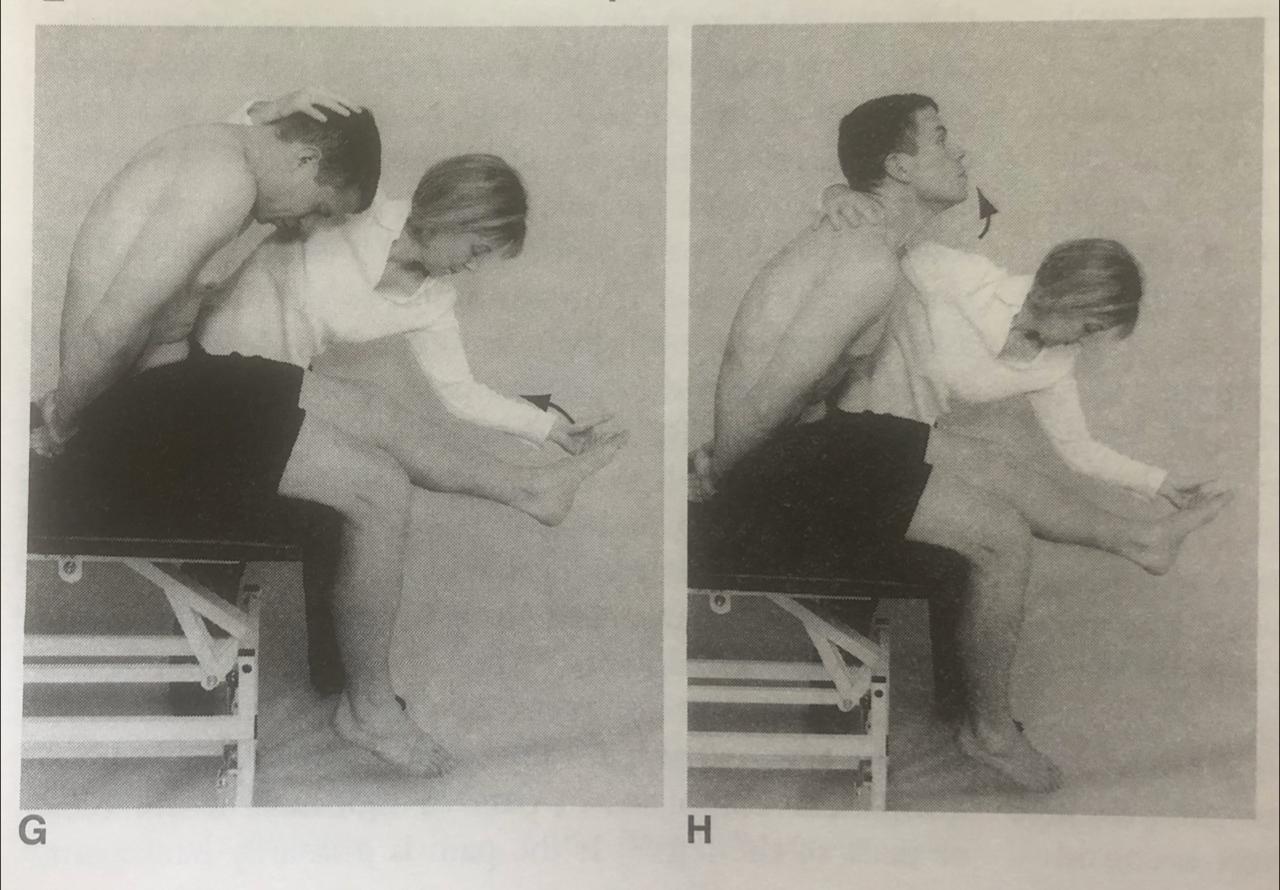 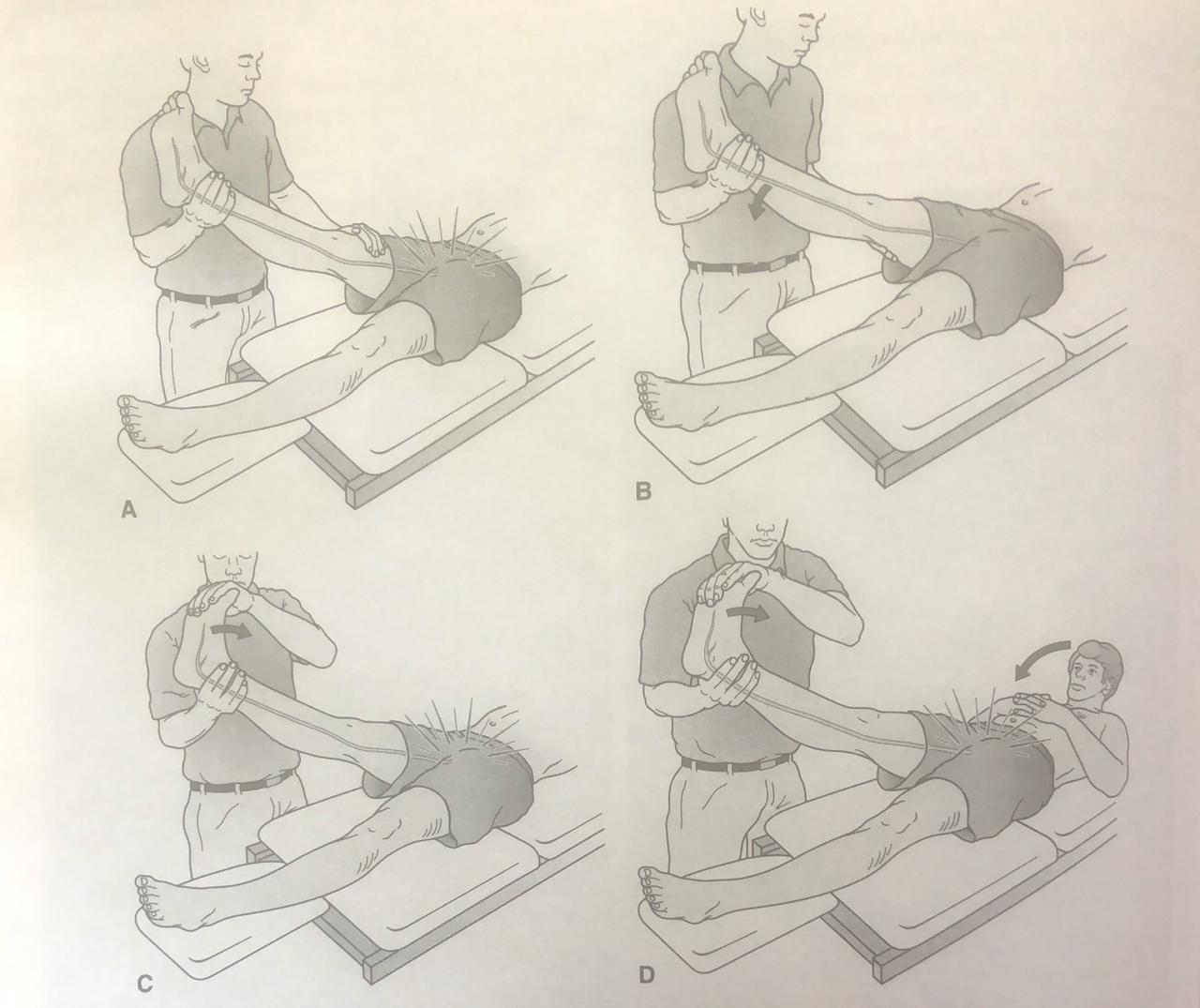 A. Radicular symptoms are precipitated on the same side with straight leg raising.
B. The leg is lowered slowly until pain is relieved.
C. The foot is then dorsiflexed ,causing a Return of symptoms, this indicates a positive test .
D. To make the symptoms more provocative, the neck can be flexed by lifting the head at the same time as the foot is dorsiflexed. 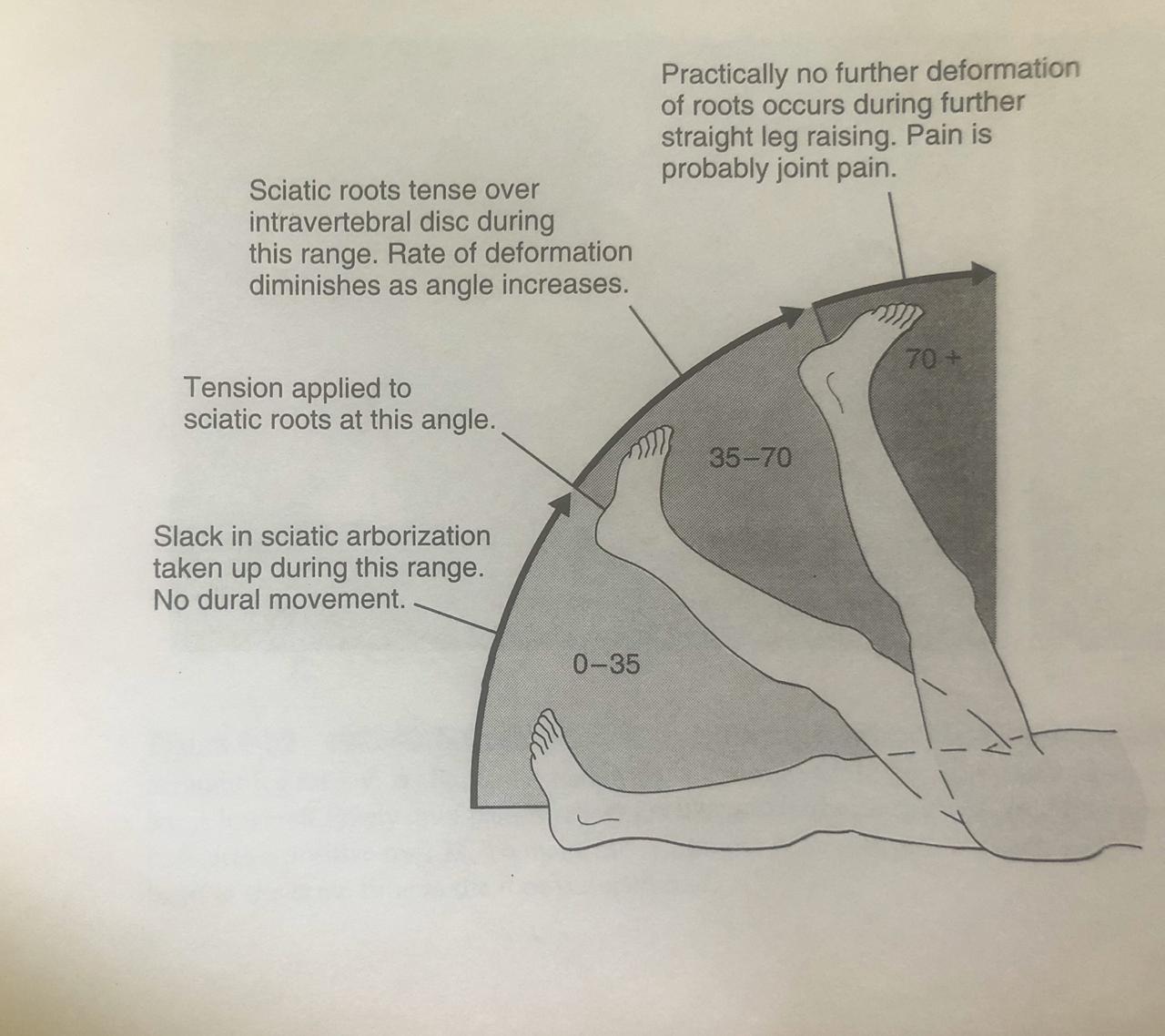 Thus after performing few of these tests and many more if required,, we have highlighted only few,,,just for an understanding purpose.